Book Direct with the Owner at StageDoor Dinner Theatre with Find Attractions in Bowen Hills, for all your Attraction and travel needs.

The StageDoor Dinner Theatre was officially opened on July 17th 2002 by Judy Cornwall (Daisy from "Keeping Up Appearances). Since then literally thousands of patrons have seen a wide variety of comedies, thrillers, cabarets and celebrity luncheons.

This is the permanent home to Starbuck Productions, a Queensland based production company that has built a strong reputation as a provider of quality entertainment. Starbuck was established more than a decade ago and in this time has produced live entertainment in venues such as the Queensland Performing Arts Centre, The Suncorp Piazza, Seagulls International Showroom, the Twelfth Night Theatre and in regional touring venues throughout south east Queensland.

Already their stable of shows is impressive, including Brisbane seasons of Hollywood Legend Mickey Rooney, Australian Musical sensation Rhonda Burchmore, The Australian Tom Jones Spectacular, Little Shop of Horrors.
More recently Starbuck has presented Agatha Christie\'s "Murder On The Nile", "Witness For The Prosecution", "And Then There Were None", and the riotous comedy "Ladies Night." 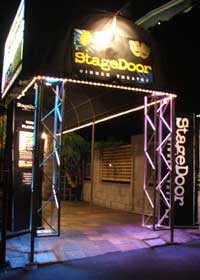 Find Attractions welcomes StageDoor Dinner Theatre in Bowen Hills QLD, we offer an experience that takes you on a journey of a life time in Bowen Hills. For all your attraction and things to do, book your adventure today.

Is StageDoor Dinner Theatre in Bowen Hills your property on Find Attractions, please claim your listing and subscribe to update your contact details and receive your phone calls and emails from your clients.